History of Red Beans and Rice

Red beans and rice are synonymous with New Orleans, but how did that become so? In an earlier post on Haitian Soupe Joumou (Beef and Pumpkin Soup), I shared its connection to the successful Haitian slave revolt against the French. Well, this victory had major repercussions for New Orleans and it's origins as an American city.

The great French general Napolean had visions of colonizing Louisiana. But in the process of trying to reclaim Haiti from the former slaves that had earlier soundly defeated the French, he got his ass kicked so thoroughly, he and French leaders decided to abandon plans for an empire in the Americas.

I mean they were so shook, they sold Louisiana territory to that paper chaser Thomas Jefferson at a bargain price in what is known as the Louisiana Purchase. Now I remember learning about the Louisiana Purchase in high school but I don't recall any mention of a Haitian Slave Revolt. For those unfamiliar with this important moment in American History, the Purchase allowed the U.S. to open up the Mississippi Valley, expanding is territories and slavery which meant and led to greater economic might.

Jefferson had been seeking to by only New Orleans, but Napolean offered up all of the French lands west of the Mississippi which included after basically deciding to get out of the slavery business. American acquisition of Louisiana was the result of the sacrifices of hundreds of thousands of former brave African slaves. Yet somehow we as a Nation continue to ignore, dismiss, vilify, and exploit the very people we owe for our prosperity as a country.

Ha, the irony! The success of the Haitian revolution had a direct impact on the expansion of the U.S. We built our empire on this lopsided deal in the same way Jimmy Johnson and the Cowboys fleeced the Vikings with that Herschel Walker trade and netted three super bowls in five years.

To quote that great American Alexander Hamilton, to the deadly climate of St. Domingo (Haiti), and to the courage and obstinate resistance made by its black inhabitants are we indebted. [The] truth is, Bonaparte (Napolean) found himself absolutely compelled and not by Jefferson to relinquish his daring plan of colonizing the banks of the Mississippi. Just how big was the purchase - it doubled the size of the U.S.

So what does this have to do with red beans and rice you ask? The block in Haiti was so hot, those white evacuees from Haiti sought refuge in New Orleans. Anyway one of the food items they brought with them were red kidney beans. Monday is red beans and rice day in NOLA.

Story has it that for housewives way back in the day Monday was laundry day and with no washing machines, they cleaned all clothing by hand leaving no time to cook, so Monday dinners had to be something that could cook by itself; enter Red beans. Beans were soaked overnight, then Sunday dinner's ham bone was thrown in the pot for flavor as the beans simmered all day into a creamy goodness. It is this smoky creaminess that makes them New Orleans style!

The recipe is quite simple, but does require a few different spices since this is a seasoning centric dish.

How to Make Red Beans and Rice (Step By Step

Patience is the main step for this recipe. Cooking red beans and rice is easy, but it takes a long time to let the ingredients come together for optimal flavor as well as for the texture of the beans to break down into that essential creaminess essential.

Step 1: Dice the holy trinity ingredients (celery, onions, and peppers) along with the garlic

Today, in most cases depending on preference, the beans seasoned with that holy Cajun Trinity (celery, onions, and bell peppers) and cooked down to almost paste-like after slow and seemingly all-day simmering to render aromatic bliss.

All you need is rice to round out this dish. Cornbread is a great add as well. I suppose you could throw in a salad for good measure like:

If you make this easy red beans and rice with sausage recipe, please come back and leave me a comment below with your feedback. Definitely take a photo of the dish and be sure to tag #foodfidelity so that I can see them. 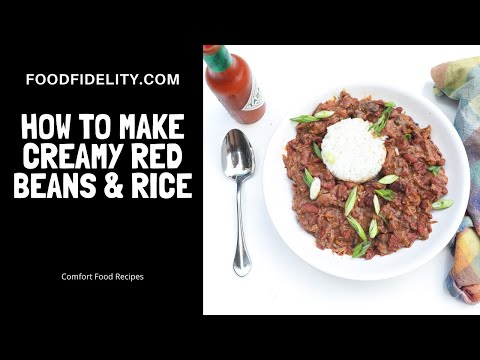 This was absolutely delicious!